We use cookies to make your experience better. To comply with the new e-Privacy directive, we need to ask for your consent to set the cookies. Learn more.

The Open Source Code Signing certificate is intended for developers and software producers working under Open Source licenses. Sign without a cryptographic card and reader from today! 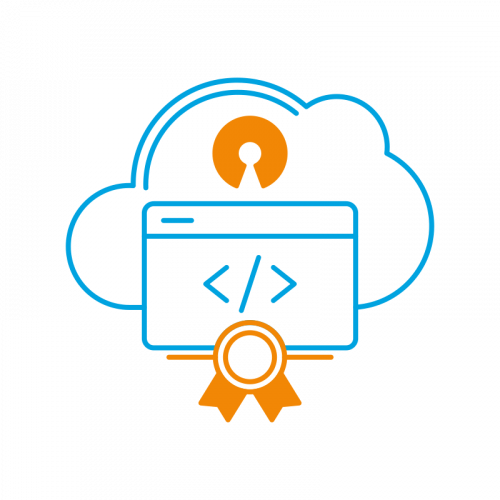 Skip to the beginning of the images gallery
Details

The Open Source Code Signing certificate for SimplySign is intended for developers and software producers working under Open Source licenses. Thanks to SimplySign you do not need to use the card and reader to sign code and applications!

Certificates enable software developers to digitally sign the original code and recipients to verify data integrity. They eliminate the anonymity of applications published on the Internet - they contain the name and surname of the author. They ensure that the program has not been modified by unauthorized persons or viruses since it was signed by the publisher.

This service does not apply to M2M applications, and mass signing of e-documents.
Why is it worth?

WHAT DO YOU NEED TO USE SIMPLYSIGN?

The use of SimplySign only on mobile devices:

SimplySign is a mobile application thanks to which you will sign all the documents functioning in the electronic version. As part of this application, there is also an OTP code generator, which is needed to authenticate the user to the service of remote service signature (he can also install it on another mobile device).

The use of SimplySign on mobile devices and on traditional PC / Laptop computers:

SimplySign- download this application to your mobile device to use the OTP code generator, which identifies the user in the process of signing on a traditional computer: PC / Mac OS. As part of this application, there is also a module that allows you to sign documents on a mobile device.

SimplySign Desktop - download this application so that you can use key services available on the market such as: Payer, eDeklaracjie, ePUE, etc. The SimplySign Desktop application emulates the connection of a physical cryptographic card and card reader to your computer. Thanks to this solution you will be able to use SimplySign in applications requiring a physical card. As part of this application, there is also a proCertum SmartSign module that allows you to sign documents on a traditional computer: PC / Mac OS.

Detailed information about the complaint process is included in Terms & conditions.
To Top